The opening of red snapper season is always a favorite of many regular customers. These fish are hard fighters and they are also great table fare. This year, red snapper season opened with a bang - we haven’t seen reds this big in several years - with most fish averaging 10-15 lbs. During this first week of the season, we’ve been most productive on the second reef line. The water clarity has been really good, so make your leaders as light as possible and be prepared to switch to fluorocarbon if your monofilament leaders are not producing. The bait of choice has been live pilchards, but fresh goggle eyes or ballyhoo will do almost as well.

In deeper water, we have been finding mahi-mahi and tuna – both fish are highly prized for their eating value. The mahi-mahi have mostly been located under frigate birds or floating debris. While the tuna are being found under larger flocks of birds – usually 10+ birds seen working an area or actually feeding. The tuna are usually under the birds and feeding on the same prey. Keep in mind the tuna may stay deeper during the heat of mid-day, so it often best to target them in the early morning or late afternoon. We will usually run offshore first thing in the morning searching for mahi-mahi and tuna opportunities, but as soon as the sun get high, we’ll transition to the reefs and drop baits to the bottom for snappers and groupers.

Back on the reefs, kingfish and Spanish mackerel are available and willing takers of top-water and mid-water baits. It’s worth the time to have at least one bait rigged with wire, fishing the upper half of the water column, while you’re concentrating on pulling in those snappers and groupers. I like putting a live blue runner on a balloon and put it “way-back.” More often than not it will produce a nice smoker king or a nice shark. 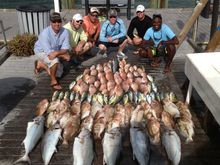 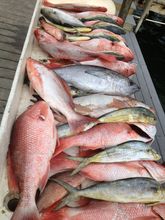 For more frequent updates and photos, visit us on Facebook.

Give me a call and let’s talk fishing.

Back to Main Fishing Report Page 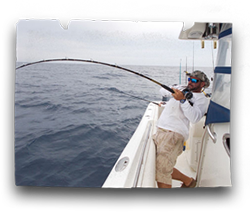 We've had some amazing catches over the years. Check out our Photo Gallery to see what we catch on Florida's gulf coast...See More 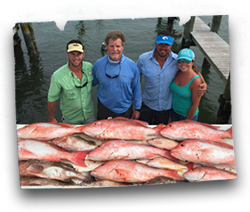 Book your fishing trip of a lifetime now! Offshore Hustler can comfortably accommodate up to 6 passengers... Read More 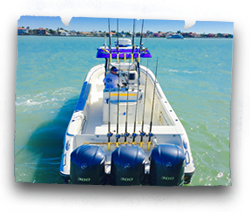 Fish in style and comfort aboard a 35' Triton fully loaded with Furuno electronics and powered by triple 300 HP Yamaha four strokes..... Read More